Last year, as a result of face to face discussions and exchange  with INTRAC, Andrew Lees Trust and its local partner Andry Lalana Tohana were invited to participate in sharing the experience of the exit process that has been core to the Trust’s strategy in Madagascar.

The INTRAC study, reported in its recent newsletter in the chapter “Rethinking Partnership, exit and sustainability”  has been published by BOND, the international development network in their PPA series of reports, and is entitled ” What’s it like to be on the receiving end of exit”

The study focused on perspectives of exit and transition from partners in the global south. It provides insights how in country stakeholders experience the process, and makes recommendations. ALT Mg’s perspective is important, coming from a significantly smaller local organisation than the two other well known agencies. 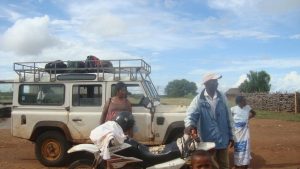 Hanitra and a member of the  ALT MG team arriving in Akilisoa Somangy 2 in 2017, with vehicles transferred to their ownership by ALT UK during the exit strategy (completed in 2010)

Hanitra Raharimanana is Director of Andry Lalana Tohana (ALT MG), The Trust’s local partner in Madagascar, and she provided her personal reflections on the transition process that was the focus of The Trust’s sustainability strategy leading to its exit from Madagascar, and the full hand over of assets, know how and resources to ALT’s Malagasy field team in 2010.

The exploration and understanding of responsible exit strategies, sustainability of local NGOs and civil society organisations (CSOs), and divesting power to the south is an important theme in current development discourse and ALT UK/ALT MG are delighted to be part of this research, especially its Southern perspective.

The Trust is currently supporting Andry Lalana Tohana as it delivers an emergency (cash transfer) programme in the Androy region, following the 2016 serious drought and famine .