The Trust has attended many Rio Tinto AGMs over the years in order to raise issues about the Madagascar mine operated by  Rio Tinto’s subsidiary: Qit Minerals Madagascar (QMM),  and advocate on behalf of mine affected communities.

This year, The Trust joined forces with six other organisations committed to holding the company to account over QMM’s Biodiversity Offsetting programme in Madagascar, including: Andrew Lees Trust, Collectif Tany, Friends of the Earth, London Mining Network, Re:Common, War on Want and World Rainforest Movement.

The AGM in April 2017 action was planned around the visit to the UK of a representative from the village of Antsotso in the Anosy region, Southern Madagascar, in order that he could put his case to Rio Tinto and its shareholders at the AGM and explain the way he and his fellow villagers have lost their food security and livelihoods as a result of the ban on forest access created by QMM’s Biodiversity Offsetting programme.

Just weeks before the AGM, the local community representative, Msr Athanase, learnt that his visa application to the UK had been rejected, thus thwarting any chance he might have of bringing his problems to the attention of Rio Tinto shareholders from his very direct and personal experience. His application was rejected by the UK Government on the basis that he lacked the expertise and skills to talk about human rights and the environment. 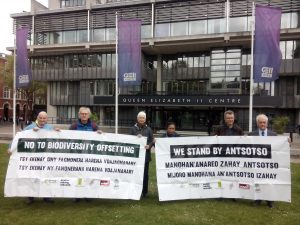 The Guardian newspaper and The Times both covered the story of the UK Govt’s refusal of Msr Athanase’s visa.

However this did not deter efforts to bring the community’s issues to the attention of the company and a statement was read at the AGM by Mamy Rakotondrainibe of Collectif Tany ( see summary at  London Mining Network AGM Report).

In parallel, the Director of Andrew  Lees Trust also asked questions of the Board surrounding the issue of encroachment of legally protected buffer zones around the current mine operation site and the related concerns of radioactivity pathways and how they are being managed. ( see summary below, and article at The Ecologist)

Summary; Extract of Rio Tinto AGM Questions to Board

Yvonne Orengo, from the Andrew Lees Trust, said that she wanted to talk about transparency. She welcomed that the company has become a leader in tax transparency and thinks shareholders will also want the company to be even more transparent about how the company conducts its business in countries where it operates, especially where there is weak governance, as in Madagascar, so that communities – like those mentioned earlier eg in relation to the Biodiversity offsetting – are not deleteriously affected by the company’s or its staff behaviours.

For example, she is aware from her experience of the Madagascar mine over many years that those who complain about what is happening, or particularly what is not happening around the mine in Madagascar, are harassed or intimidated. Yvonne had spent many hours with Rio Tinto executives in London discussing these matters over a period of many years.

She said she had two questions to raise and asked firstly why QMM had breached a legal buffer zone, in place under national law, to protect waterways that feed into the town and areas used by locals for drinking water and fishing, to create a man made, artificial extension of land into the buffer zone. These activities had been kept below the radar by the company but the evidence is there on Google Earth.

She then asked why there was no transparency over the radioactivity pathways of the mine. The company was rightly concerned about the health and safety of its employees, and that was welcome, but how conscious was the company of the threat to the health and safety of people in surrounding communities from mine tailings, especially given the slow progress on rehabilitation? The radioactivity question was pushed under the carpet twenty-two years ago. Yvonne was in the town at that time when local regional representatives were explaining how the company had assured people there were no concerns. However, the quantities of ilmenite being dredged, meant that the levels of radioactive NORM (e.g. Uranium and Thorium) from Zircon and Monazite by products are now very high and this should therefore be a concern. She asks the company to be more transparent on this subject and felt sure the shareholders would want that too, and not want to be earning dividends from the company if the price was placing local people’s health at risk.

J-S Jacques replied that the company had a broad range of monitoring devices. Water is constantly monitored and no pollution had been noticed. QMM also monitors radioactivity. He suggested that the best way forward was for him to meet with Yvonne and Mamy in May. He undertook to go on site so that he could see it with his own eyes.

Yvonne asked for an assurance that whatever is discussed in private meetings would be put into the public domain on what the company was doing about monitoring, including of findings on radioactivity. She said that the company’s biodiversity committee had resigned last year but that was still not in the public domain and shareholders probably did not know that this had happened. So she asked for an assurance that this kind of information would be made much more public in future. It is hard to hold QMM to account when information is not forthcoming, and the lack of transparency represents a reputational risk to Rio Tinto.

Jan du Plessis said that Rio Tinto believes in transparency. Unless the company is sensitive to the communities in which it operates, it will not be able to operate. He said that there had been many examples over the years when people had raised issues with the company at AGMs and they had taken these matters up. Meetings like the AGM serve a purpose because they provide a forum for people to make these kind of points, and the company takes them seriously. 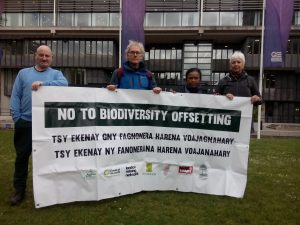 You can listen to the full AGM here

The CEO of Rio Tinto, Jean Sebastien Jacques asserted in front of shareholders that he wished to address all these questions in person and has requested a meeting with Collectif Tany, Andrew Lees Trust and London Mining Network in May.

One Response to AGM ACTION 2017