Posted on 4 September 2014 by Yvonne Orengo

It has been some time since our last news update  – apologies and thank you for your understanding. We hope this latest post will catch up our supporters about what we have been doing to assist the development of our local partner Andry Lalana Tohana and its projects in Madagascar…..

From the UK , The Trust continues to provide Mentoring and Technical Advice to  Andry Lalana Tohana (ALT Mg),  and to its radio for good governance project, Village Voices for Development (VVD) including proposal writing to raise funds and assisting with strategic negotiations with international partners and donors.

Village Voices for Development (VVD). Since January,  ALT MG has been able to finalise the formal training of local radio journalists in VVD methodology, and in conflict resolution techniques using media (with additional training from SFCG) under its UNESCO grant. (see December 2013 post)

6 local radio journalists (from Amboasary, Ambovombe, Fort Dauphin, and Bekily) and 3 ALT team were trained in the role of journalism in conflicts , using the Common Ground approach; the journalists also learnt ALT’s VVD methodology  to improve citizen engagement in governance via the media , and how to conduct phone in programmes for citizens.  Additionally 20 radio listening groups from across the two regions of Anosy and Androy were identified and 263 villagers received face to face education and  training about human rights –  in particular rights to freedom of expression and access to information. Trano Aro Zo worked in partnership with ALT to deliver the hands on rights education to villagers. These listening groups then discuss and provide thematic content for the radio programmes in the form of questions to local decision makers.

The ALT team have spent the last nine months accompanying the journalists in the field, 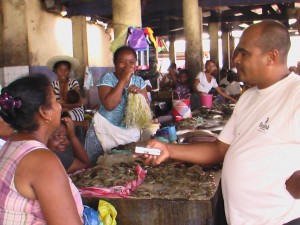 helping them to work with the listening groups and learn and improve skills to produce Q & A citizen engagement programming on a monthly basis using VVD methodology and phone ins. Broadcasting through 6 radio stations across two regions – Anosy and Androy, the project is creating 4 regular broadcasts  per month, two in each region, and additional phone-in programmes. This work has been undertaken with support from The Adsum Foundation (UK). The programmes reach over 150,000 listeners.

The work is still in progress and capacity building of local journalists will end in October. The radio stations have already provided some very positive feedback about the work to date:

” … seems that having direct dialogue between villagers and decision makers attracts many listeners … “ host of the radio station Kaleta ,Amboasary

Transparency and Accountability – the Role of Radio

In Anosy region, the VVD work was further strengthened by VVD programming for the World Bank PGDI Accountability and Transparency programme. A small seed grant has allowed ALT Mg to trial 4 question and answer radio programmes, 4 phone in programmes and 2 additional broadcasts ( on rights and governance) under this funding.

These pogrammes offer communities a vital mechanism via the media for holding their leaders to account and raising issues that affect their lives but which might otherwise remain hidden or beyond their control.

For example, some measures have been put in place by the local authorities in the south to provide increased security for villages  – in particular to address the ongoing threat of Dahalo raids ( cattle rustling). These measures include a type of visa that must be issued for villagers travelling outside their community on business and staying in other regions overnight. 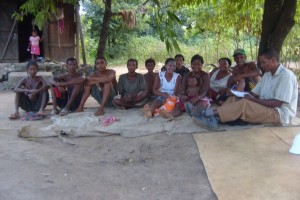 The visa is issued by their local Chef du Fokontany. However, in at least one commune, this procedure was being exploited by the local chief who was insisting that villagers pay him for visas just to go to market a short half hour walk away. VVD programming enabled the villagers to voice their concerns and questions about this practice in public, via the radio . 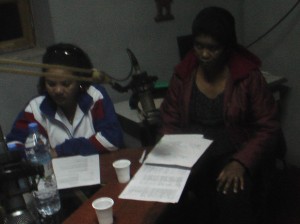 ALT team assisting at a phone in programme, July

The questions were aired together with explanations and corrections by the Head of District and local Police service, clarifying the requirements and parameters of the new visa system publicly. The progamme has created greater transparency about the  security measures, improved awareness of the practical procedures and, in so doing, helps prevent the exploitation of villagers.

ALT  is currently seeking further funding  to scale up VVD and increase activity in the two regions with this vital good governance work.

Food Security. Alongside this vital communications initiative, ALT Mg have been delivering emergency food assistance with the FAO. Providing the most vulnerable with access to seeds – including potatoes and beans, as well as equipment, in order to improve their resilience against climate shocks, poor harvest and food shortages that regularly affect the south. They have focused this work in Bekily and Beloha districts.

Additional funding is being sought to continue work on the reintroduction of drought resistant sorghum, which ALT has already successfully delivered across many communes in the south.

ALT Mg Website. ALT UK agreed with ALT MG that a single, important way to assist their fundraising and improve their presence in the national and international domain would be a dedicated website for ALT MG. The local team were struggling to provide the resources to launch the site so in December the UK ALT  Trustees and Director prioritised this work and agreed to contract ALT’s webmaster, Peter Smart, to  set up the new site. Working with the ALT UK Director, The ALT Mg Director agreed  the design and content which was jointly developed over  a number of weeks earlier this year. The site was launched in April 2014: See www.andrylalanatohana.org 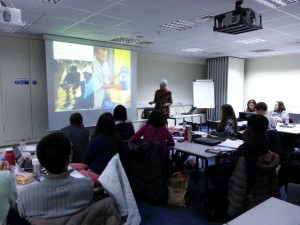 ALT Outward Bound. In February the ALT Director presented the communications work of the Trust to students at University of Surrey (Sustainability week); in July she also created a small Madagascar event for the village community where she lives, during which she raised just over £80 towards the Trust from a raffle and donations.

Sharing Our Work and Lessons. In June 2014, The Trust was delighted to learn that The Communications Initiative had published ALT’s VVD evaluation online, which shares this report with 85,000 networked professional and actors in the sector.

Remembering Andrew – The Lees Room. In July we learnt that Friends of the Earth had moved into new offices in south London and have remembered Andrew’s environmental campaigning legacy by naming one of their new meeting rooms after him. Its called ‘The Lees Room’ and FoE have generously extended an invitation to ALT to hold its meetings in this space.

We note that Wikipedia now has a formal entry for Andrew Lees  at http://en.wikipedia.org/wiki/Andrew_Lees_(environmentalist)

IT Support. During the year a number of works had to be undertaken to tackle IT issues (virus attack/memory upgrades) and website updates. Thanks are due to our volunteers, Peter Smart (Webmaster), Andrew Petrie and Tom Melly (IT support) for their valuable time in making everything work, and better.

Thanks too go out to our regular supporters, the donors and our wider volunteer network for ongoing inputs and advice to ALT and ALT Mg’s programme in Madagascar.